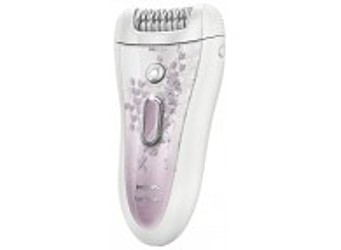 Technique for beauty and health

This epilator I have fourth. Before it was, too, "Philips". One of the first was "Philips" with metal disks, and "Philips" with newer ceramic discs, and here's a "Braun".

After his last and only "brown" I just decided that I would buy epilator it is "Philips". The brand I was already familiar and well-proven.

I chose this model, because the kit includes a shaving head with trimmer, and so I was interested in the massage attachment.

And also included is a brush for cleaning device and nozzle comb.

The epilator is quite massive, heavy and very loud growling. For some reason I expected that since this is a new and expensive model, and work the epilator will be completely quiet and delicately sounding.

The switch on the epilator on the fan: it is pretty tough turn on, have to get used to at first. Apparently, such a flat button is made specifically to protect from water. The device also has a backlight. And there's a pouch for storage.

Works the appliance from the battery, which lasts for forty minutes stated. As is the case in fact, I won't tell, not timed. But all the charm of not on time discharge of the battery I remember. The appliance suddenly stops, if it worked, security protection, and it is locked! I first thought, because the sound setting of the battery is almost imperceptible, sits down at once. Well, to use the device from the cord impossible. Cord is used only during charging. But, but, you can get a razor anywhere, not shaking around him with cord.

To use the epilator in the water I honestly did not try. The epilation head in use, but not often. But the shaving head tried to use with foam in the shower. It seemed to me that she's less rough on the skin and the faster it shaves.

But in General, a shaving head and a trimmer on it better than my old Braun, but still, somehow, worse than on my old Philips. This feature works well, I use it often.

Attachment comb too, not used even once, because I have nothing to say.

Itself proven epilation function is in principle no better than the old model Philips. But my old "Philips" was also ceramic discs, but in smaller amounts. So, I'm all for ceramics. I think metal disks even angrier and more irritate the skin.

Well, the massage attachment is also much better than my model of "Braun". But my finger massage system in the old "Philips", in my opinion, was more effective.

By the way, to set the massager in this model, I had to call the service center. The nozzle was too intricate. So here it is obvious that the producers went overboard.

Before I used to use the epilation head as hair removal, but then with the birth of a child was once so long to devote as much time to this task. Now weaned and just hurts. Sometimes master just feet, and not to the knee. So, no matter how expensive epilator was not from pain he will not spare.

Megamarket with a huge selection of a wide variety of products and many bonuses and discounts.3 monthsComputer programs

Now you do not have to choose who will be left overs! A tripod will help you!4 monthsAccessories for equipment

I took it from behind the camera, but I’m happy with everything! It’s convenient to use it. Quick. I started playing games)).3 monthsMobile phones

This is not an analog of an iPhone, it is the best powerful camera phone. Great real feedback from active use for almost six months.about 1 monthMobile phones

Comparison of the free version with the full paid version! Do not regret 119 rubles. to the full version, and to whom it is especially useful!3 monthsComputer programs